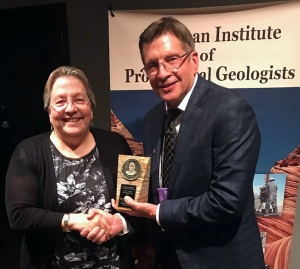 The medal is awarded to individuals who have long records of distinguished and outstanding service to the profession. The most important criterion for this medal is a continual record of contribution to the profession of geology. A wide variety of contributions can be considered, such as: (a) the education and training of geologists, (b) professional development of geologists, (c) service to the Institute, (d) leadership in the surveillance of laws, rules, and regulations affecting geology, geologists and the public, and (e) activity in local and regional affairs of geologists.

Barb has served several times on the AIPG’s National Advisory Board, as Vice President, as 2012 National President, as chairperson of the AIPG annual meeting in Flagstaff, Arizona in 2008, and has been an active member on several AIPG specially-tasked committees. She worked with AIPG staff and AIPG headquarters in development of the Geosciences On-Line Initiative (GOLI) webinar program. As AIPG’s President, she worked to increase contact with members and to reorganize several sections. She worked with the Geological Society of London in developing an MOU for comity between the organizations for CPG and CGeol applications. Barb has represented geologists at the Arizona legislature and at conferences in matters related to professional standards and the importance of what geologists do.