With experience at hundreds of contaminated properties, DBS&A has established a reputation for providing innovative, cost-effective solutions to address our clients’ environmental challenges. We apply our understanding of regulations, permitting requirements, compliance strategies, and broad experience base to implement the appropriate solution for each site.

Our engineers, hydrogeologists, and environmental scientists are supported by an outstanding group of modelers, database analysts, and GIS specialists who convey complex technical concepts through easy-to-understand visual aids. Our engineers are experienced in designing and constructing award-winning remediation systems that are some of the most innovative in the country.

Media and contaminants of concern (COCs) that we have experience addressing at Superfund and other contaminated sites include:

Structures that overlay volatile organic compound (VOC) contamination in soil or groundwater may be subject to hazardous vapor intrusion. DBS&A’s scientists and engineers help our clients to address this threat.

DBS&A professionals have investigated subsurface vapor migration and vapor intrusion for more than 20 years. This experience encompasses the gamut of VOCs, including chlorinated solvents and petroleum hydrocarbons. Vapor intrusion-related services that DBS&A provides include:

DBS&A has successfully worked on VOC migration in groundwater from releases at landfills, industrial facilities, refineries, gasoline stations, and dry cleaning facilities, and underneath commercial facilities and residential neighborhoods. DBS&A’s Soil Testing and Research Laboratory offers a specific vapor intrusion analysis package for key soil properties that control subsurface vapor migration and risk. DBS&A is equipped to handle all aspects of vapor intrusion issues that our clients may face. 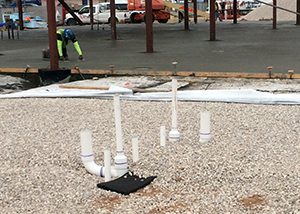 What Is Vapor Intrusion?

What is vapor intrusion?

VOCs are released to soil and groundwater from leaking underground and above-ground chemical storage tanks, infiltration from surface spills, and waste chemical disposal in leach ponds, dry wells, and leaking sanitary sewer lines. VOCs volatilize from contaminated soil and groundwater, and under certain conditions, will enter indoor air of buildings through cracks or seams in foundation slabs or basements.

TCE is one of the most ubiquitous VOCs at contaminated sites; it has been found in at least 852 of the 1,430 National Priorities List (NPL) sites identified by the EPA. In a series of memorandums released from 2012 to 2014, the EPA established an “Accelerated Response Action Level” of 2 µg/m3 for TCE in residential indoor air at specific NPL sites Regions 9 and 10. Interim response measures if TCE is detected at or above 2 µg/m3 includes immediate relocation of residents.

The new Region 9 and 10 Accelerated Response Action Level is far below previous action levels or standards for TCE in indoor air resulting from vapor intrusion. For example, a guidance document published in 2008 by the California Regional Water Quality Control Board – San Francisco Bay Region had listed a requirement for immediate mitigation if TCE was detected at or above 120 µg/m3 in residential indoor air, or a level 60 times higher than the new standard. It is currently unclear if this new TCE standard will be implemented by the EPA nationwide.

The Secondary Screening step uses site-specific data to evaluate the potential for vapor intrusion based primarily on soil vapor data. It also relies on the EPA-published Johnson/Ettinger mathematical model to extrapolate VOC concentrations from soil vapor into indoor air. This tiered approach, including reliance on the Johnson/Ettinger model, has been replicated in many State-issued vapor intrusion guidance documents.

In April 2013, the EPA released an “external review draft” of the “final” vapor intrusion guidance. This draft eliminates the Secondary Screening and moves directly to a detailed site investigation based on the minimum criteria: (1) VOCs are present in the subsurface, and (2) there is “actual or potential future presence of buildings nearby.” Recommended detailed vapor intrusion investigation includes groundwater sampling, soil vapor sampling, building surveys, and indoor air sampling.

Indoor air sampling can be problematic because of the possibility of “false positives.” VOCs common to contaminated sites may also be present in indoor air due to off-gassing from consumer products (e.g., paints, solvents, aerosols). For this reason, soil vapor sampling and associated mathematical modeling has often been preferred to indoor air sampling during initial site evaluations and screening. The EPA’s suggested elimination of the secondary site-specific screening represents a significant shift away from reliance on soil vapor sampling and mathematical modeling and towards indoor air sampling. In guidance entitled, “Assessing and Mitigating the Vapor Intrusion Pathway from Subsurface Vapor Sources to Indoor Air,” the EPA states:

In short, the EPA now lacks confidence in the results of mathematical modeling and, thus, has recommended moving towards reliance on actual field data rather than models.

Utility corridors are underground utility lines or pipes (e.g., sanitary sewer, storm, water, gas, electric, or telecommunications) and the excavated and back-filled trenches that contain them. In some cases the excavated trenches are back-filled with material that may more readily transmit vapors compared to native soils. Because these corridors are often specifically directed towards building foundations, there is concern that they may act as a fast pathway for vapor migration from contaminant sources towards or underneath buildings. A 2013 investigation of a home nearby a contaminated site in Massachusetts (Pennell et al., 2013 indicated that elevated PCE detected in the indoor air was caused by the presence of PCE in the sanitary sewer line and infiltration of sewer gas through a faulty toilet fixture. The 2013 EPA external review draft vapor intrusion guidance and several recent State guidance documents specifically call for evaluation of utility corridors during vapor intrusion investigations. 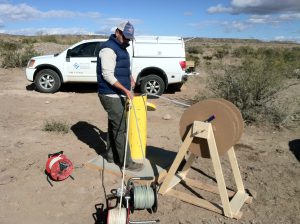 Long-term site monitoring and the operation and maintenance (O&M) of a remediation system can greatly impact overall project cost and is often critical to regulatory closure. DBS&A has extensive experience with design and installation of groundwater monitoring wells, and we perform routine monitoring and reporting and O&M at dozens of sites.

DBS&A engineers and technicians are experienced with operating, troubleshooting, and maintaining a wide variety of remediation equipment and, therefore, consistently maintain a high rate of system uptime. Our ability to keep systems up and running has resulted in the regulatory closure of several hundred sites.

All field work is carried out in accordance with site-specific health and safety plans, approved work plans, and/or standard operating procedures to ensure that data quality objectives are met.

DBS&A has a tremendous amount of experience in remedial investigation, design, and action, including construction, at several hundred petroleum storage tank sites impacted by petroleum hydrocarbons. Our firm is built upon a reputation for high-level knowledge in hydrogeology, including specialized expertise in vadose zone hydrology and contaminant fate and transport modeling. Our understanding of contaminant fate and transport in the subsurface results in more accurate site assessment and, ultimately, more efficient and cost-effective remedial actions and site closure. Our environmental engineers have successfully designed and implemented more than 100 soil and groundwater remediation systems throughout the West using a broad range of remediation technologies. DBS&A also possesses the technical and regulatory expertise to fully permit remediation systems, having prepared  discharge plans, groundwater appropriation permits, and air quality permits.

We completed remediation of the Santa Fe County Judicial Complex in 2014 after recovering approximately 140,000 pounds of hydrocarbons from the subsurface utilizing a dual-phase extraction system, including horizontal soil vapor extraction (SVE) wells. This project was awarded an Engineering Excellence Award by the American Council of Engineering Companies. 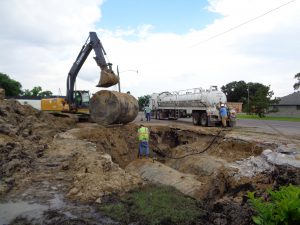 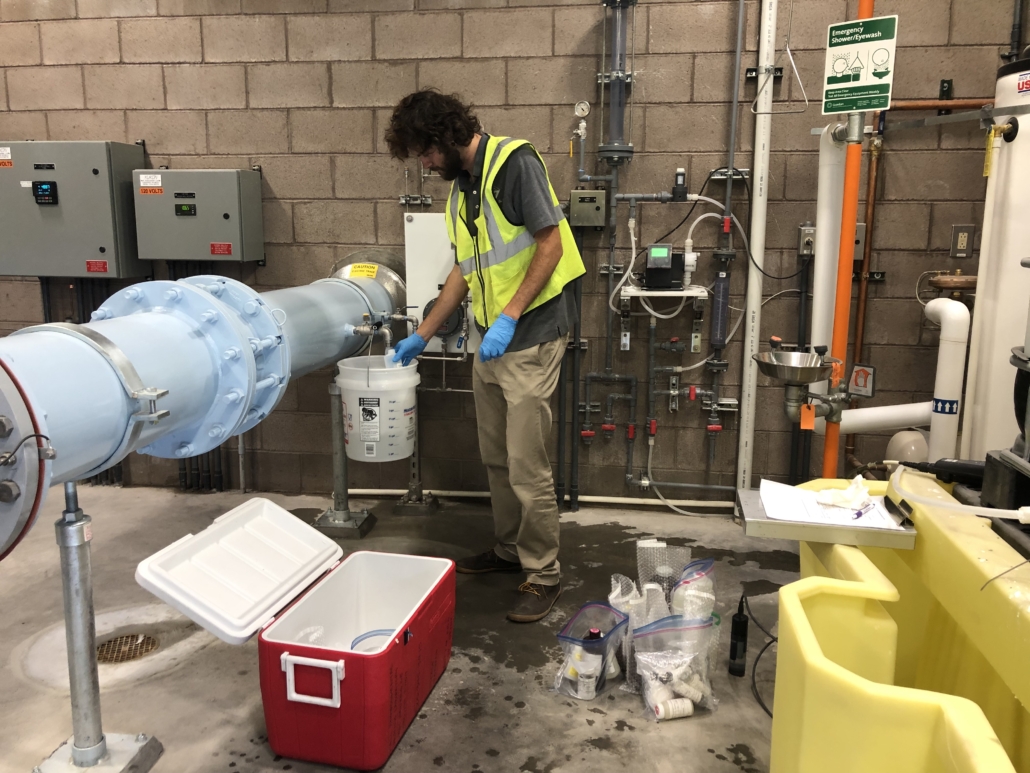 From field investigations to fate and transport modeling, our scientific experts and environmental professionals have experience in conducting poly- and perfluoroalkyl substances (PFAS) investigations. We have the expertise to quantitatively and systematically determine the extent of PFAS impacts to soils, groundwater, and sediment. Our team can assist clients in selecting a PFAS remedy that reduces risks to human health and the environment.

DBS&A has established a reputation for providing innovative, technically sound, and cost-conscious remediation system design, installation, operation and maintenance, and removal action. We have successfully designed and implemented more than 100 soil and groundwater remediation systems to address soil and groundwater impacted by petroleum hydrocarbons, chlorinated solvents, metals, and mine wastes. DBS&A conducts feasibility studies to evaluate the appropriateness of remedial technologies and to select technologically suitable, cost-effective solutions to subsurface contamination. Our design experience ranges from plans and specifications for simple excavations to complete multi-media extraction and treatment at Superfund sites. Our work is routinely reviewed by state regulatory agencies and the Environmental Protection Agency with minimal comments.

DBS&A works with clients to select the appropriate remedial technology for site-specific conditions, regulatory requirements, and costs. We have designed systems that actively remediate soils with soil vapor extraction and treatment via technologies such as thermal oxidizers, internal combustion engines, and catalytic oxidizers. Where a less aggressive approach is needed, we have used bioventing to address landfill gas issues and low concentration soil vapor problems. Our engineers and technicians are also experienced with operating, troubleshooting, and maintaining virtually all types of remediation equipment. As a result, run time on our remedial action systems is generally greater than 90 percent, and often higher than 95 percent.

For sites with contaminated groundwater that may not require aggressive mass removal, we have designed interceptor trenches that rely on bioaugmentation to reduce contaminant levels to the point where monitored natural attenuation is appropriate. Traditional pump and treat systems can also be used, applying air and/or ozone sparging to increase mass removal, where necessary. Treatment trains may include packed column air strippers, low-profile diffusers, and granular-activated carbon. Where light, non-aqueous phase liquids are present, we also use pneumatic phase-separated hydrocarbon pumping systems. 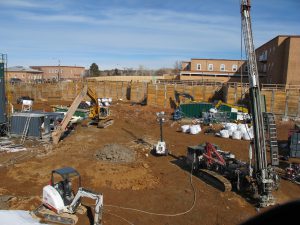 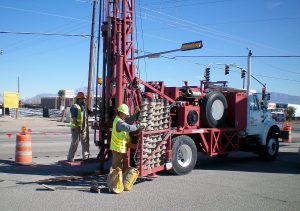 DBS&A tailors our investigation approach to the project’s specific needs. A well-designed and executed subsurface characterization is the key to developing an effective, site-specific remedial approach. Investigation approaches vary from minimally intrusive TRIAD-based investigations to CERCLA- based remedial investigations with dozens of wells installed to delineate contaminant plumes. We also perform due diligence paper and field studies in support of real estate transactions.

DBS&A has experience working at all types of sites, including:

DBS&A has 35 years of experience at Superfund sites. We are accustomed to the challenges common to cleanup and closure activities in both urban and rural areas. We have provided CERCLA support services, including remedial investigations and feasibility studies (RI/FS), remedial design (RD), and remedial action (RA). Sites include chemical storage and recycling facilities, refineries, wood-treating facilities, unknown solvent releases, abandoned mines and smelters, and plating operations. We have evaluated the release of chlorinated compounds (PCE, DCE, and TCE) with plume lengths of more than a mile. DBS&A works with our clients, stakeholders, regulatory agencies, potentially responsible parties, and attorneys to mitigate risks to human health and the environment at Superfund sites. 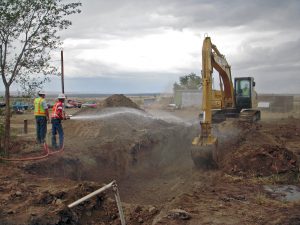 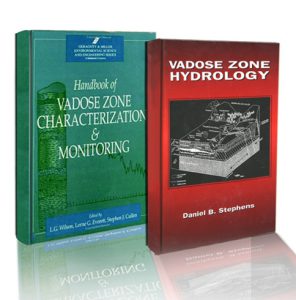 Water may move through the vadose zone in a counterintuitive fashion. In some instances, under unsaturated conditions, water will preferentially flow through the finer-textured soils. There can also be considerable lateral water movement in an unsaturated condition where complex stratigraphy exists. These flow phenomena are controlled by the soil water characteristic and hydraulic conductivity properties of the various soil layers. These properties can be quantified through laboratory and field tests and incorporated into models to predict the direction and rate of water movement.

DBS&A has completed many challenging vadose zone projects, from modeling fate and transport of contaminants through fractured volcanic rock, to field-testing the permeability of sediment underlying a uranium tailings disposal facility. DBS&A has provided expertise on technical issues related to litigation and other investigations, including: