DBS&A’s team of scientific experts and environmental professionals have experience in conducting poly- and perfluoroalkyl substances (PFAS) investigations ranging from field investigations to fate and transport modeling. Our staff has the expertise to quantitatively and systematically determine the extent of PFAS impacts to groundwater, soils, and sediment, and to assist clients in the selection of a PFAS remedy that reduces risks to human health and the environment.

Our first PFAS investigation was in 2002, and since that time we have supported PFAS investigations in Arizona, California, Michigan, New Mexico, and West Virginia. DBS&A staff has provided expertise in support of litigation on several PFAS matters, supported several municipalities in delineating PFAS contamination, have lectured on PFAS forensics methodology to several groups including Law Seminars International (LSI), the National Groundwater Association (NGWA) and American Groundwater Trust (AGWT), and are members of the NGWA PFAS Working Group.

For more than 30 years, DBS&A has provided environmental services, including conducting hydrogeologic investigations, characterizing soil and groundwater contamination, contaminant source and fate and transport investigations, remediation of contaminated groundwater and soil, landfill engineering, and providing water resources services, such as water rights analysis, and water supply development and planning, including in support of litigation. 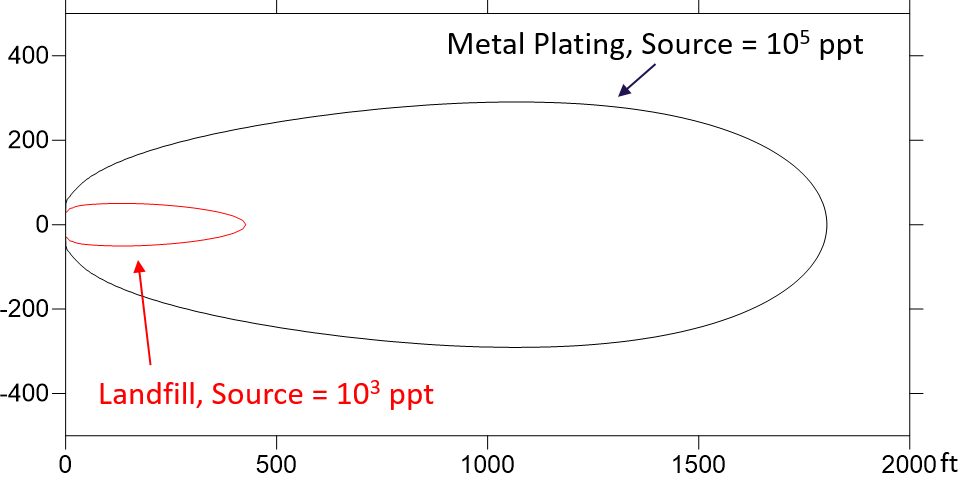 Comparison of a hypothetical PFAS groundwater plume (to 70 ng/L) associated with a metal plating source versus a landfill leachate source. 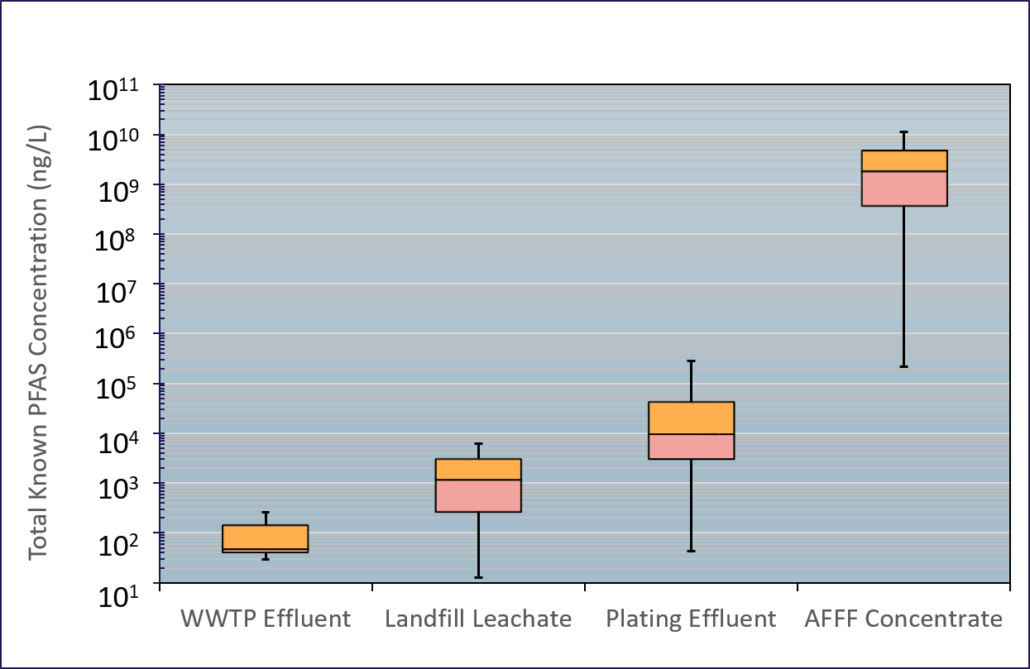 DBS&A has characterized the chemical signature and total concentration of PFAS expected from various sources, which vary significantly. This box-whisker plot shows the expected range of total known PFAS from several types of sources.

Although there are thousands of PFAS compounds, certain PFAS have received particular regulatory attention. These key PFAS compounds are differentiated by the number of carbon atoms in the molecule and the presence of either a sulfonate or carboxylate functional group.

PFAS are extremely persistent in environmental media because of the highly stable carbon-fluorine bond. PFAS are resistant to environmental degradation processes and exhibit moderate sorption to soils and sediments dependent on the individual compound properties. PFAS typically have low volatility, but can adsorb to particles and be transported long distances in air. Because different PFAS transport at different rates, the distribution of various PFAS compounds will change from the source release to a receptor some distance away such as a groundwater production well.

In May 2016, the USEPA issued lifetime drinking water health advisories (HAs) for perfluorooctanesulfonic acid (PFOS) and perfluorooctanoic acid (PFOA) of 70 nanograms per liter (ng/L), which applies to PFOS and PFOA individually or in combination. In February 2020, USEPA announced a proposal to regulate PFOS and PFOA under the Safe Drinking Water Act (which would result in a federal maximum contaminant level [MCL]) and requesting information and data on other PFAS substances.