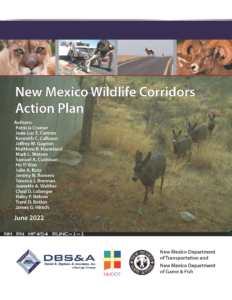 The New Mexico Legislature passed the 2019 New Mexico Wildlife Corridors Act, calling for the development of an Action Plan that guides NMDOT in its efforts to build wildlife road-crossing structures where they are most needed in the state. Through modeling and field studies, the Action Plan identifies and ranks areas across New Mexico where wildlife-vehicle collisions pose the greatest threat to the traveling public and/or wildlife movements are most severely impeded by road traffic. Six large mammals are the focus of most of the modeling: mule deer (Odocoileus hemionus), elk (Cervus canadensis), pronghorn (Antilocapra americana), bighorn sheep (Ovis canadensis), black bear (Ursus americanus), and cougar (Puma concolor) (also known as mountain lion or puma). A list of additional species impacted by roads in New Mexico is provided in the Action Plan, which identifies specifically where road-crossing structures should be built, what type (overpasses, enlarged culverts, or bridge underpasses) will most effective for reducing wildlife-vehicle collisions and enhance habitat connectivity, and how much they will cost.

Following the release of the draft Action Plan in January 2022, DBS&A, NMDOT, and NMDGF jointly held virtual public meetings to present the Action Plan, its methodology and results, and the priority areas for building road-crossing structures. A 60-day public comment period enabled federal, state, and local agencies, tribes, environmental NGOs, property owners, and other stakeholders to provide input. The final Action Plan, which is now being released, reflects the input of the public and includes a list of possible funding sources and mechanisms for the implementation phase, which comes next.