Custom-designed clear acrylic experimental columns allowed for visual observation and time-lapse photography during the curing process and during subsequent wetting and drying of the material.

DBS&A developed the Coal Combustion Residual Encapsulation Study to help EPRI (Electric Power Research Institute) and associated electric utilities develop safe, sustainable, long-term disposal alternatives for waste products. Current disposal methods require extensively engineered and monitored systems, which are expensive and burdensome to regulate. This project is helping to develop a solution to waste disposal that generates an inert and stable product that can be disposed of more safely and cost-effectively. Phase 1 of the project involved a small-scale evaluation of the mixture of waste products. The mixture consisted of materials provided by Southern Company and included fly ash and process brine along with a small amount of Portland cement. DBS&A laboratory personnel mixed the components and poured them in lifts into 12-inch acrylic columns. The curing process was monitored using time-lapse photography and water-content monitoring equipment. This is an innovative application of equipment typically used to measure water flux in soils. Scientists evaluated the columns for crack development and propagation, which can significantly impact a material’s hydraulic conductivity. This initial phase of work determined that cracking was relatively minor and that the equipment remained functional in the curing material. 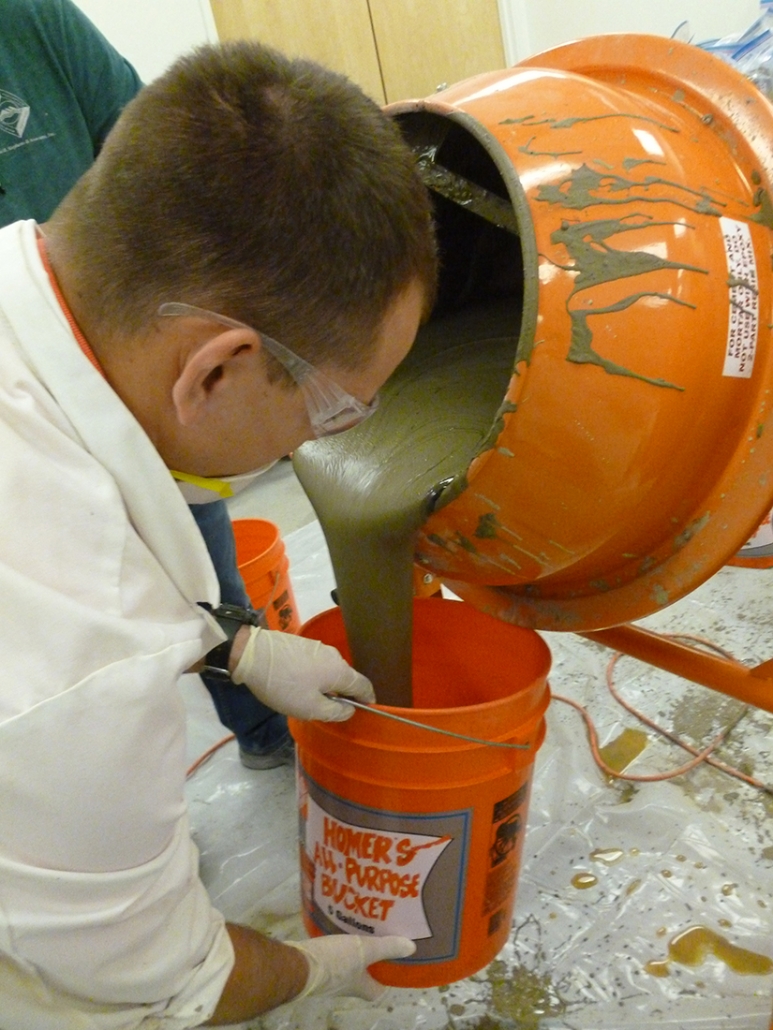 For the large-scale tests, a cement mixer was used to prepare the ash, brine, and cement mixture, which was poured in successive lifts into a 4-foot by 3.5-foot lysimeter on top of a sand drainage.

For Phase 2 of the project, DBS&A constructed a larger-scale lysimeter in the laboratory using an approximately 4-foot by 3.5-foot vessel with a sand drainage layer in the bottom. Laboratory personnel poured successive lifts of ash, brine, and cement mixture into the lysimeter. Monitoring instruments were placed in each lift of material to measure temperature, water content, and moisture potential. Three lifts were installed over a period of approximately one week. Scientists monitored instrumentation to record the temperature and moisture of the material during initial curing. After a curing period of three weeks, scientists added water to the lysimeter to evaluate both the conductivity of the material and water quality of the surficial runoff and any water that percolated through the material. The installation is fully functional and can be used to track the water flux into and through the individual lifts. Initial results indicated a low level of hydraulic conductivity of the encapsulated material. Additionally, chemical analyses indicated low levels of leaching of potential contaminants.

The success of the first phases of the study and potential for using the methodology to encapsulate waste products led DBS&A’s scientists to continue testing and monitoring of the laboratory-scale experiment in combination with installation of three field-scale studies in cooperation with EPRI at electric utility sites.  DBS&A presented the preliminary findings at the World of Coal Ash conference. Click here to read the paper.

Since developing the method, DBS&A’s laboratory has performed over 1,000 RBRC tests for 18 major international mining companies. The method has been adopted as the standard and is followed by several other laboratories.

For more information, contact  Laboratory Manager Joleen Hines, at (505) 889-7752, or email her at jhines@dbstephens.com or jhines@geo-logic.com.