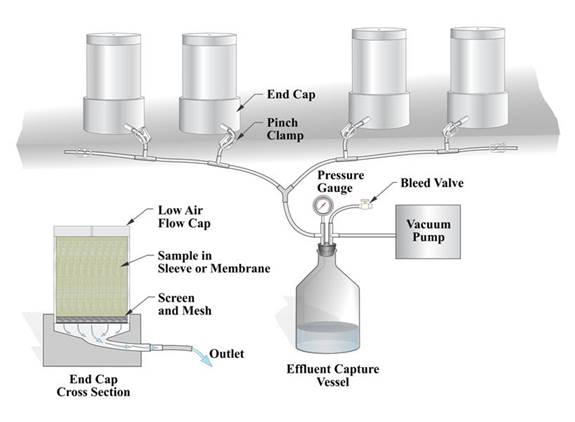 DBS&A, in conjunction with the University of New Mexico’s Department of Civil Engineering, developed a method to estimate the brine released by pumping a brine-saturated geologic unit. This method addresses the need of people who are evaluating mineral-rich brine-saturated deposits for a rapid screening test—one that is suitable for multiple samples and textures and that avoids issues associated with brine as the pore fluid. The test method involves applying a vacuum to a group of saturated samples in a parallel configuration (as shown in the figure). The parallel configuration allows rapid analysis of up to 10 samples simultaneously. The amount of brine produced in response to the vacuum, referred to as the “relative brine release capacity” (RBRC), provides a basis for comparison of the amount of brine produced from different samples. The RBRC is related to the specific yield of a material, which is principally a function of material texture.

In the DBS&A/UNM study, the method was first applied to sand, clay, and sandstone samples saturated with tap water so that the results could be compared to water-retention data developed from standard methods. The results were consistent with the water-retention data and the range of published specific-yield values for these textures. DBS&A/UNM performed subsequent measurements on more than 800 undisturbed brine-saturated samples obtained from a potential mining site, with lithologies ranging from unconsolidated sands to rocks (sandstones and halite). The RBRC values were in the range expected for the texture of the materials and were consistent with results from standard tests using tap water on similarly textured materials.

For more information, contact the Laboratory Manager, Joleen Hines, at (505) 889-7752, or email her at jhines@geo-logic.com.